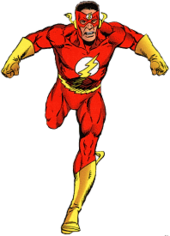 The Flash's origins come in many different ways depending on which version of him you are talking about. In the comics, The Flash is the son of Henry and Nora Allen. When Barry was a kid, his mother and father's relationship wasn't working out positively, and keeping in mind that he arranged to take an interest in a spelling bee at school, his mom Nora was attempting to energize him in spite of working two double-shift jobs and attempting to get a separation from his dad Henry. He got the legal documents upon the arrival of the spelling bee, and on the grounds that Nora needed to work, he fumed and took Barry to class. When Nora came back from work, she was glad to see that her child had won the challenge, yet she was committed to address Henry about their relationship, thus Barry was sent to the book shop meanwhile. When Barry returned, sadly, his mom had been killed, and his dad had been put in prison, however he maintained his innocence.

Luckily, Darryl Frye, who had covertly been included romantically with Nora, pulled a few strings and had the option to take Barry in. Having gained from Darryl that the quest for proof, all things considered, would unavoidably prompt reality, Barry turned into a forensic scientist. For quite a long time, he visited Henry in jail, promising to investigate the entirety of the proof of his mom's homicide case until he figured out how to demonstrate his dad's innocence. Following quite a while of returning, and neglecting to locate any verification, Henry bawled in tears and conceded that he had carried out the homicide. The stun of understanding that the entirety of his endeavors had been to no end discouraged Barry. The evening of a tempest, Barry indignantly destroyed his lab. Abruptly, an electrical jolt smashed through his lab's window, and struck him in the chest, making him drop the concoction vials he was holding, and soak himself.

Following a multi month long comatose period, Barry woke with super-speed capacities. Roused by Darryl's model, Barry chose to take on an image for himself and battle for good. He made the ring that held his uniquely structured outfit and got known as the Flash, the fastest man alive.

Barry is capable of moving at incredible superhuman speeds. While running, he can only be perceived as a blur. He is far faster than Superman and Supergirl, and was fast enough to repair an entire city without anyone realizing he ever left the room. He's so fast in fact time seems to slow down around him, making him appear to be invisible to others within their relative time frame. Barry has even shown he can clear out the entire population of Tokyo (around 38 million people) in only 30 seconds. Barry has also moved fast enough to that the Shade's shadows, which move at the speed of darkness (speed of light) appeared frozen in time. Barry's speed also allows him to utilize superhuman force, which he can channel to simulate superhuman strength, such as when he easily crashed and broke through a wall made of steel or rushing an alien gladiator and sending him flying a few feet off the ground, when he was not looking. Barry's reaction time is increased to superhuman levels. His great reflexes have allowed him to perform feats such as dodging lightning. Barry's body can handle the stress of moving at superhuman speeds for long periods of time without out getting tired or weak. Barry's agility, balance, and bodily coordination are enhanced to superhuman levels. This allows him to easily maneuver and leap far distances while moving at superhuman speed.

After Barry was struck by a bolt of lightning and doused with chemicals, it created the Speed Force - a mysterious cosmic force that pushes time and space itself forward. As it does this, the Speed Force creates excess energy that builds up and needs to be released. The Flash is effectively the Speed Force's release valve. When Barry uses his powers, he taps into that built up energy and expends it. The Flash has a Speed Force Aura. The Flash's body is surrounded by a "friction cushion", a field of kinetic absorbent energy that protects him and anyone who is running with or carried by him from the rigorous effects of using his speed. Including friction, airborne particulate matter, heavy impacts, G-Force and the like.

Barry can heal much faster than any regular human. His arm healed within minutes of it being crushed. He was also able to quickly heal from the "bone crushing pressure" and "antagonizing trauma" of being 2,000 feet below the ocean, which dealt extreme damage to his body.