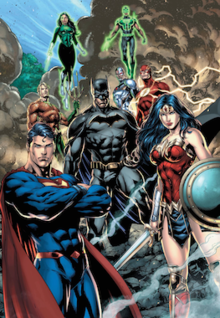 The Justice League is an team of fictional characters in the DC Universe . It consists of various characters that have been in and out of the team. Some of these characters include The Flash, Batman, Superman, and Aquaman. The team has different origins and backgrounds. One variation describes that competing alien warriors were sent to search for who may conquer Earth 1st, to see who can become the new ruler of their home planet. The attacks of the aliens had gotten the attentions of Aqua Man, Flash, Batman, Green lantern, Martian Man hunter, Superman and Wonder Woman. Though the superheroes on an individual basis defeated most of the invaders, the heroes fell victim to one of the single competitor's attack; solely by cooperating with each other were they strong enough to defeat the competitor. For several years, the heroes began to add more and more heroes into the team as they were faced with different problems in villains throughout their fights.